The importance of community involvement in development is becoming more and more apparent as new innovations are being created to solve some of the biggest problems.

It’s so cool to see this being applied to the issue of water and education in Kenya!

As published on FastCoexist by Adele Peters

When it rains, most buildings shed the water away. But for the last 10 years, two designers have been working on perfecting a new form of architecture that does the opposite: Waterbank buildings harvest and store as much rainwater as possible.

A new school campus in Kenya based on the design will collect 1.5 million liters of water a year—more than enough to provide water for all of the students and support garden plots in a region where clean water can be hard to find. Every building on the campus, from dorms and classrooms to a soccer stadium, is designed to harvest water and channel it into underground storage. 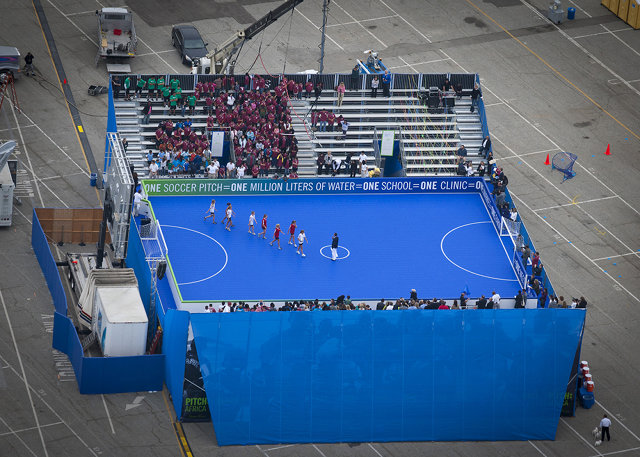 Though Kenya’s climate is semi-arid, the architects say there is enough rainfall each year for the population. “Many people who don’t have access to clean water, and this is true in Africa, are living in regions where it’s raining at least 600 millimeters per year,” says Jane Harrison, co-founder of PITCHAfrica, the nonprofit that designed the new buildings. “And that’s a very strange fact. The issue, of course, is that the water evaporates and it’s erratic, so people don’t have it when they need it.”

The architects are taking a different approach than many water nonprofits. “A lot of focus tends to be on the problems of water being solved by technological solutions,” says Harrison. “But one of the big factors with water is social. The idea that there needed to be a social approach—a community approach to water—was important to us.”

When the project first began in 2004, the architects had the idea to combine water collection with soccer—since soccer brings communities together. “I think the more we began to look at Africa, the more we began to think about the incredible power that football has there,” Harrison explains. “It really does cross over many social differences and brings a large and diverse audience together. And we felt that if you could couple that kind of energy and attention with the huge need of water, it would be powerful.” 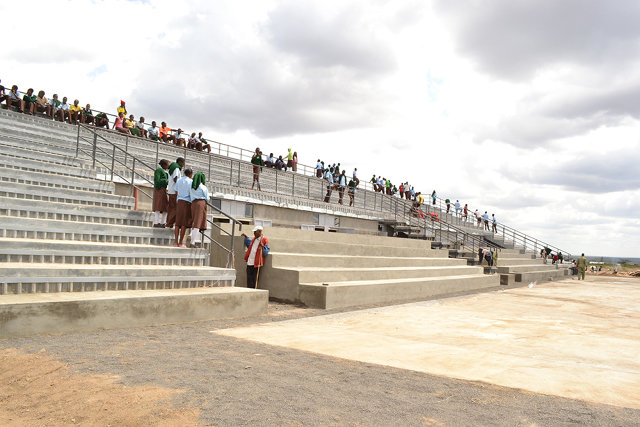 In 2010, the team built a prototype of a water-harvesting soccer stadium during the World Cup. For the last four years, they’ve been working on bringing the architecture to life in Africa, and experimenting with creating different types of community buildings, since they quickly realized that the design could work well with more than stadiums.

First to be built was a four-classroom school in Laikipia, Kenya, which was named the“Greenest School on Earth” last year. With careful planning, it was possible to build for the same cost as a typical rural school of the same size. The new campus built this year replicates that project at a much larger scale—and includes the team’s first actual soccer stadium as part of the design.

Next year, the nonprofit hopes to release Waterbanks OS, an open-source operating manual that explains how to design, build, and use a Waterbanks building—including how to manage water supply in the dry season so the water doesn’t run out.

The technology could work in many parts of the world, the designers say, including places that seem too dry and those that actually do get plenty of rainfall, but struggle with pollution. “This is surreal, but we’ve now been approached by organizations working in the rainforest in Peru,” says Harrison. “These are communities who do not have access to clean water because of what’s been going on in the rainforest. Our relationship to water is very skewed. I think part of our larger mission is to start to draw attention to that.”