Magical Saturday for Me and GiveMeTap

On Saturday 12th August so much happened! If you want to find out right now what happened then jump to the last section titled ‘I couldn’t believe my eyes’, otherwise follow the story of one my most memorable days. First we must start at the beginning; on Friday.

Where it all began

Friday - I woke up that morning and said “it’s time to move out”. Living back with my parents had been great, but I needed some fresh patures to grow GiveMeTap and myself. There was so much conviction in my thoughts, that I scheduled to see 2 properties that evening. The first place I saw was a mess - not for me at all, leaving me feeling a little down thinking to myself, “maybe it would be difficult to find somewhere in the area I wanted that was affordable”. I quickly shook off this thought, did a few more google searches and sent viewing requests to another 10 landloards/agents. Then I went to bed.

Saturday - The day begun like so many. I got up, grabbed my GiveMeTap bottle to quench my thrist after a goodnights rest, switched on the computer, and logged straight onto my email to see if I had any responses about the viewings. I had. It arrived at 8:38am and was from a guy called Dave, who said that I could come and see the place from 4pm. Now, I don’t know if you remember that Saturday - but it was set to be a very hot day (in London this is rare), and it was the one of the last day of Olympic Athletics, which I could not miss. So instead I suggested we meet at 12pm, and he agreed.

11:45am Saturday - I arrive at the house and was shown around the property by one of the current tenants. He takes me up to the room I would be possibly renting, and shows me a MASSIVE room! I had never lived in such a big room. I even began to visualise how I would use the space. Now all that was left was to get to know the people who lived there, as this was a flat share.

They were so nice and God couldn’t of chosen a group of people who shared similar interests to me. One of them completed his PhD in Mathematics (like me!), another runs her own business (like me!), and the last house mate is a web developer (like me!). Crazy right!! I was taken a back. From then I knew that this was the place I was going to stay. I phoned up the landlord and said: “I’ll take it!”. So it was just gone 12:50pm and I had made a significant change by getting a new room.

The secret’s safe with me

2pm - I arrived back home and decided not to inform anyone just yet, but quickly left again to go and meet my girlfriend (aka the hottest chick the game wearing my bottle) in London Bridge so that we can take the clipper on the London Thames. And spend the next few hours at The O2 (you can tell I love water :)) having dinner outside.

A stroke of inspiration

7:30pm - After having our bellies filled, we raced down to Oxford Circus to return some clothes, then decided to find a bar to watch Mo win and see Usain do the insane by winning another gold medal.

10pm - I found out earlier that day about a party at Hyde Park, so suggested leaving Oxford Street and walking there. On route, we bump into my sister who kindly tells us that we’ve missed all the partying at the park, but I am still buzzing from the fact that I know I have a new room so decided to just keep walking to the park anyway to relax.

I couldn’t believe my eyes

10:36pm - As we walked and talked along Bond Street I spotted a Pizza Hut in the distance and a thought passed through my head. As quickly as the thought came, I saw something in the window of the shop that made me buzz with excitement and quickly cover my hands over my girlfriend’s eyes. She kept saying “What? What is it?” But I love keeping her in suspense, so I just gently guided us towards the window (all the while I am smiling from ear to ear). We get within 1 metre of the window and I then remove my hands. Can you guess what was in front of us? It was this!!!! 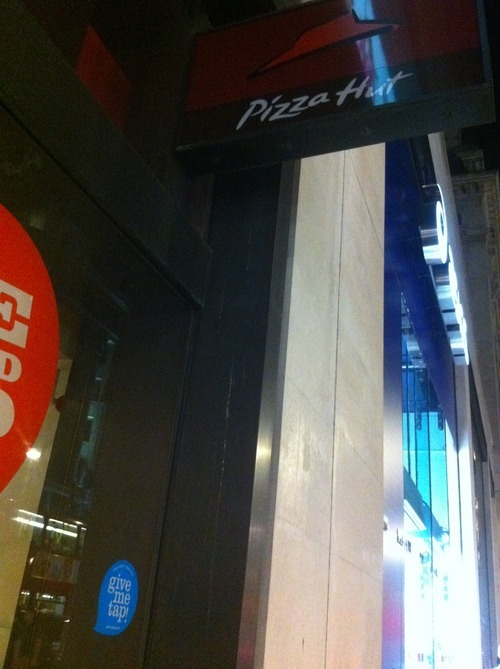 Yes! GiveMeTap is now at Pizza Hut!! Can you believe it! We have got our first large food chain on board the GiveMeTap scheme. Now you can get free water refills at 12 London Pizza Hut’s. I’ve worked relentlessly over the last 10 months (since I first met the CEO of Pizza hut from my previous post back in October 2011) to get our first large food chain on board and I couldn’t be happier to be working with Pizza Hut, who truly understand our mission. When I saw the sticker on the window I was stunned, happy and had watery eyes as I remembered how much I’ve wanted to make GiveMeTap work for everyone.

So now all that’s left is for you to take your GiveMeTap bottle to your nearest Pizza hut and show them how important getting access to free water is!

Just say 'GiveMeTap!’ when you get there.

Here are some more action shots. 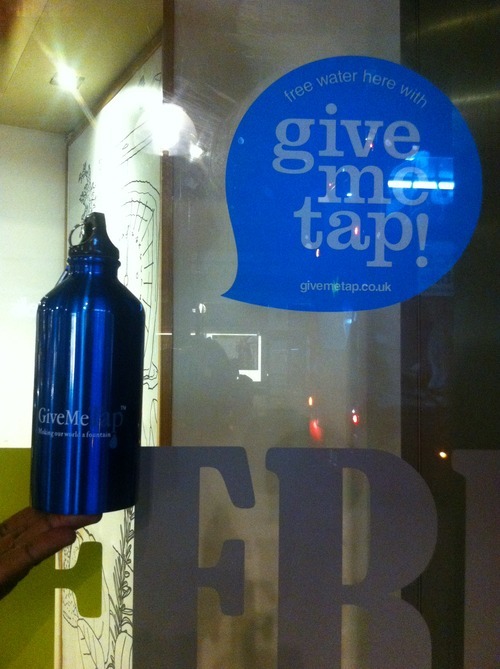 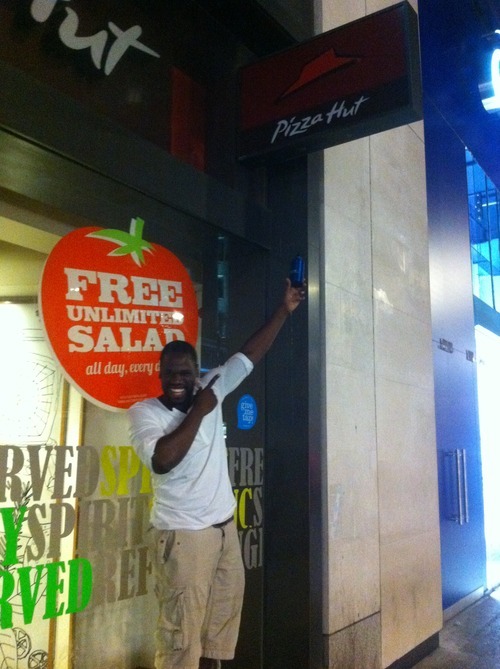 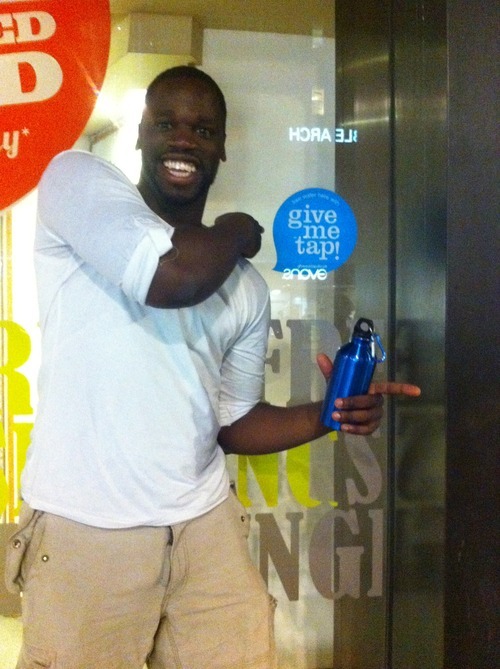 From the happy GiveMeTap Team!