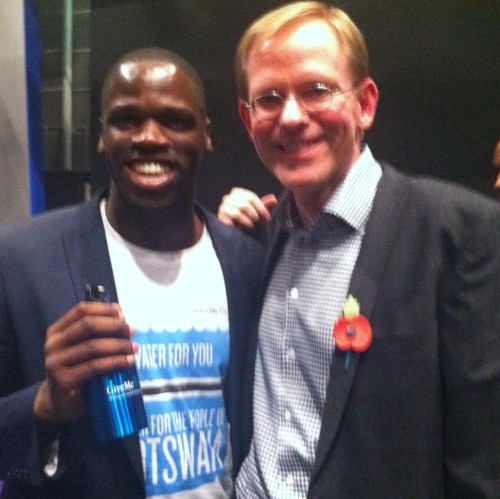 We’re oozing with excitement here at the GiveMeTap Towers. Can you tell? So much stuff is happening withGiveMeTap at the moment that it would just be super unfair for us not to share all the great news with you. Yes, you mean that much to us, you really do!

Guess who got invited to be part of the live studio audience on BBC Three’s  ‘Up For Hire Live’ show on Thursday night? None other than Edwin and the GiveMeTap Team!! The tube trek to the other side of London, all the way to the famous BBC Television studios in White City was well worth it! We had an awesome time taking part in the grand finale of what had been a special week long show, with the fabulous hosts Richard Bacon and Tina Daheley.

The 90 minute show took on a multidimensional format which included a video diary of the four recruits who were hurled into the deep end and became top company MD for a day. Comments and feedback from employers from some of the UKs biggest and most popular brands such as Pizza Hut, Liberty and AOL Europe, as well as an interactive and heated studio audience debate about issues centered around youth unemployment and education such as the value of university, unpaid internships and the rise of young entrepreneurship.

At the end of the show we also got to chat to people about the GiveMeTap movement and share our 'water for you, water for everyone’ message with all the new and friendly faces that we met! We even got to rub shoulders with the main guy at Pizza Hut -Jens Hofma. Check out the groovy pic of him and Edwin above!

As you can tell, we had a brilliant time. We’re still buzzing from it actually - nothing beats a live atmosphere! So, not to rub it in or anything, but if you missed 'Up For Hire Live’ this past week, then you missed out. Like really missed out. But not to worry, no need to turn on the water works. You can easily catch up with the weeks shows on BBCiplayer…make sure you look out for us on Thursday’s episodes - we’re dotted around the audience, proudly clutching on to our super cool, metallic blueGiveMeTap bottles!

PS. We’ve got a whole load of pics and clips to show you all, so keep an eye out and watch this space!